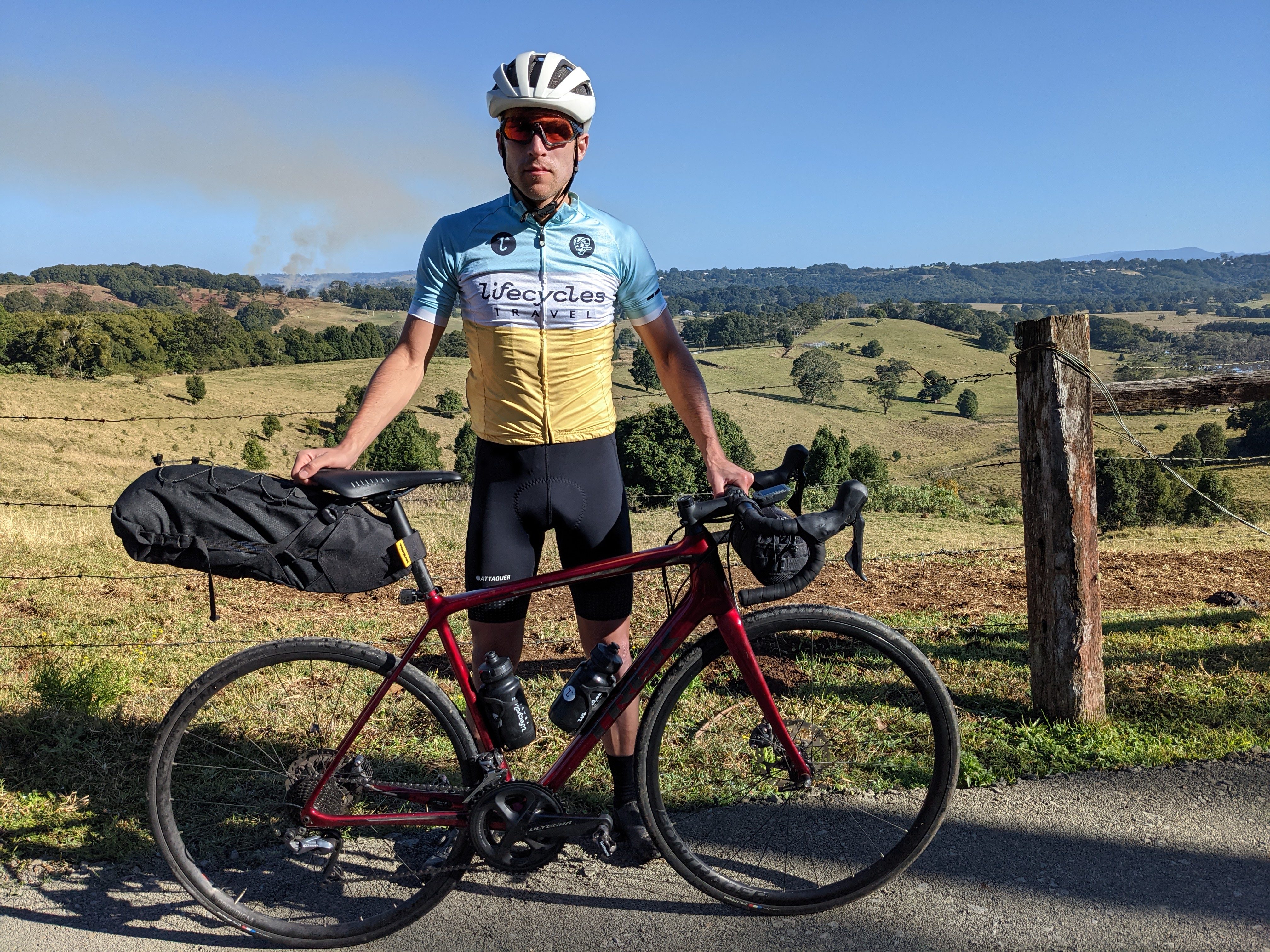 The afternoon was ours! Rolling into finish our ride at the Eltham Hotel, where the beers are crafty and the vibe is cruisy. We wheeled our bikes up to the sunny terrace and already had that warm fuzzy feeling that this may very well be one of the best weekends of riding we’d ever had. Having just enjoyed a memorable 70km ride through the Byron hinterland and ready to settle into a solid session at the Northern River’s coolest pub (which also doubled as our boutique accommodation for that night), the day was ours and we knew it.

At the time of writing this, like most, we’re sitting in lockdown. And whilst our lifestyle, among work and other things, has been fairly restricted as a result of this latest chapter of the pandemic, I can hardly wipe the grin off my face as I reflect on this recent 3-day adventure in our own backyard that I’m already comparing with cycling holidays in the Alps, Pyrenees and Dolomites.

It all started one evening recently, we were in Byron eating an ice cream while watching the sunset across the bay, the distinctive layers of light on the mountain’s horizon creating an almost perfect silhouette of the hinterland with the distinctive peak of Mt Warning popping up in the centre of the postcard image. What a beautiful part of the world this really is, and how amazing it will be in years to come when this region blossoms into a world-class cycling destination with the development of a 130km rail trail running through Byron Bay.

We began to commentate to each other what a detailed itinerary of the journey from Casino in the south to Murwillumbah in the north could look like if using roads nearby to the trail. It’s something we’d discussed continuously over the past few years and, after almost 5 years of exploring and learning about cycling around Byron, we realised that there was in fact a fairly impressive multi-day journey already there to enjoy, complete with overnight stops and must-do restaurants and cafes along the way.

Despite the solid serving of gelato that was now just digesting in our bellies, our mouths began salivating with the thought of experiencing this long weekend adventure. Perhaps it was the realisation that a lockdown on the Northern Rivers was likely imminent and we ought to enjoy our last moments of freedom while we could. We also realised that, despite having ridden every metre of this route back to front on numerous occasions, we’d actually never completed it all as one continuous journey and therefore there was in fact a ride in Byron that we had not yet done!

Byron being approx 70km from either end of the trail, we’d need transfers at the start and end of the trip. Alice’s dad Mike was all too happy to be our trusted support car driver, the deal clincher being that he was able to dog-sit our lovable 4 year old kelpie ‘Wally’ for the weekend as well. Given the ‘27 and sunny’ weather forecast expected all weekend we decided to pack light and carry our luggage so we wouldn’t need support between stops. Though I’m sure bike-packing is not everyone’s cup of tea, I can honestly say that it’s a fairly effective way of working out exactly what you need when you pack. Instead of saying “it’ll be handy” you instead ask “do I actually need it?” because you’ll be carrying it the whole time so you bloody well better!! We laid out everything on our bed and, after a fairly strict culling process, between us we ended up with a 10 litre saddle bag packed with clothes as well as a small 2 litre handlebar bag for everything else.

The most direct route, following roads adjacent to the trail, is about 147km from end to end. Both being self-admitted ‘foodies’, we opted to make a few detours along the way and ended up with what was essentially a ‘join the dots’ between a bunch of our favourite towns and cafes along the trail bringing us up to a total of 236km and 2500m of climbing over the 3 days. The added mileage also meant we might end up actually go close to burning off the inevitable degustation of mouth-watering culinary experiences we were about to indulge in.

What started in the sprawling cattle-grazing outback of the Richmond Valley about 50km west of the coast, the route then took us through subtropical Byron hinterland hills before finishing in sugar-cane flat lands of the Tweed. It is a ride that certainly haS it all. Having grown considerably fond of the cycling in this region in recent years, we sometimes found it difficult to decide which route to take at some junctions when both options were equally as appealing. Though the rail trail will be without comparison in its enjoyment and suitability for all cyclists, travelling by road allows for modification of your route to suit your preference and ability level. Go a little further, take a shortcut. Either way, it’s just as beautiful. As well as now having a shorter and longer version of the 3-day tour mapped out, we’ve since created a ‘Dirty’ trail itinerary that takes you from end to end over 2 days of 100km/day+ riding along some more advanced road and gravel routes.

To break the tour up into 3 relatively equal rides we opted to overnight at a couple of iconic Northern Rivers hangouts, Eltham and Brunswick Heads. Eltham, or more specifically The Eltham Hotel (arguably the centerpiece of the tiny hamlet some 30km south-west of Byron) was the perfect venue to satisfy our brimming enthusiasm typical of day 1 of a weekend getaway. We would have been happy with a couple of afternoon drinks, a nice pub meal and a few barstool chats, but this hipster ‘Aussie western saloon-style watering hole’ is not your usual local pub. And while all above boxes were sufficiently ticked, a savoury doughnut with smoked fish and caviar for entree and a live band playing in the beer garden took the prize for us. What started out as a noticeably solid set of covers from the clearly well-rehearsed 7-piece setup, grew into a performance that had us wondering whether there was in fact somewhere we were meant to buy tickets from on the way in. The highlight of the night certainly had to be when Luke, the publican himself, jumped behind the mic with his tea towel slung over his shoulder and donning a shiny black cowboy hat and gave a rendition of I’m on Fire that even ‘The Boss’ himself would have applauded.

The town of Brunswick Heads was the perfect accompaniment to follow the memorable, albeit slightly taxing events of the night before. We chose to stay at The Sails Motel, a trendy and well-located venue sporting an on-site pool, pizzeria and cafe/burger bar, giving it a confidently cycling-friendly feel. For a relatively small town, Bruns is flush with dining choices to suit every taste and budget, including the exclusive and very intimate Fleet, whose waitlist for a just 12 person sitting can sometimes be up to 4 months. Following a relaxing afternoon of cocktails and pizza at the motel’s Saint Maries pizzeria, we chose a casual but delicious Mexican dinner at nearby La Casita before an early night to recharge our batteries for our final day.

The beauty of a self-guided tour, or any good holiday for that matter, is the freedom to do it your way and be in complete control of your journey. That being said, if you’re going to ride the Northern Rivers Trail we’d definitely suggest not rush to the finish line each day but take your time and enjoy the stops along the way. As Ferris says “Life moves pretty fast, If you don’t stop and look around once in a while, you could miss it.” For us, the stops were all about the food and I’d be here all day if I went into detail about all the amazing meals we had along the way at Lismore’s Flock Espresso Bar, The Bexhill General Store, Bangalow’s Woods Cafe, Old Maids Burger Bar in Brunswick Heads, The Tyalgum General Store and Husk Distillery. At the same time, just being a tourist and observing a place as you casually stroll through and participate without overly impacting the community is satisfying as much as it is enjoyable. The whole region is oozing with not just the potential of what will become as a flow-on effect of the development of the rail trail, but also an already-existing saturation of quality tourism and hospitality. It’s not just isolated to the coastal towns but spread invitingly across the hinterland and countryside, ready to be explored.