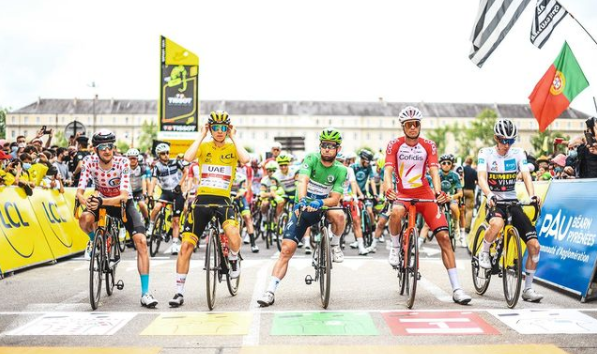 It is, quite simply, the most beautiful sporting event in the world. But what is it about the Tour de France that has us struggling to turn our heads away for three weeks in July every year? The scenery, the chateaus, the mountains, the cities, the towns and the views. Much like the whales that migrate back to Byron around the same time each year, these are scenes that you will never get tired of watching. But there’s something more than just jaw-dropping ‘panorama’ that has millions of people around the world, and not just die-hard cyclists, tuning in to watch the Tour day after day.

For the past three weeks, like many, we sat glued to our screens nightly watching the SBS Cycling Central team curate another memorable edition of the world’s biggest annual sporting event, the Tour de France. I’ve been following the Tour for 22 years now, including a couple of unforgettable editions there live at the event, and after all these years I think I’m more in love with the race than ever.

Perhaps it’s just a natural by-product of a year without international travel, and endless late nights and hours watching the peloton navigate its way through the beautiful French countryside. It’s hard not to start dreaming about that next cycling holiday in Europe.

In fact, it is so much more than just a race. Forget worrying about how to explain a game of test cricket to someone, imagine trying to explain to a first-time viewer how hundreds of bike riders across a number of teams race for individual glory in a selection of categories that suit different sorts of riders across a range of stages over a period of 3 weeks. I’ll wait until you’ve got your head around that before moving onto lesson #2: team sponsors and the ‘early breakaway’…

It’s fair to say that after the controversy-ridden era of the 90’s and 00’s, professional road cycling has had a bit to prove. It doesn’t feel all that long ago that it seemed as though the most common question you’d get asked about the Tour was “Do you think they’re all on drugs? Or just most of them?” This crescendo of disturbing noise lurking in the background of the sport culminated in early 2013 when Lance Armstrong finally came clean about the sophisticated performance enhancing drug program that accompanied his 20 year professional cycling career, resulting in him being stripped of his record-breaking 7 Tour de France wins and instead earning him the title as potentially the most controversial and discredited figure in sporting history.

Thankfully, only 6 months earlier at the 2012 Tour de France, a young Slovenian sprinter Peter Sagan burst onto the front pages of cycling headlines by winning the opening stage of that year’s race and in doing so became the youngest rider to win a Tour stage since Lance himself. Whilst we still had to wait a few more months before coming through the very darkest days of cycling, these events at the 2012 Tour arguably signalled the beginning of the ‘Sagan era’ and, in my mind, a somewhat ‘renaissance’ of cycling. What Sagan has brought to the sport, and which has since become (refreshingly) mainstream in the pro peloton, is a level of ‘panache’ that has captured the hearts of the fans and viewers around the world and in doing so restored the inspirational and heroic qualities of cycling that filters down from the elite and speaks volumes to the everyday cyclist.

I have no doubt that heroes have existed throughout the history of the pro tour, and that panache came long before Sagan. In terms of personalities, there’s probably no bigger name than Cippo and, on the 10th anniversary of his monumental Tour victory, how could you not mention Cadel.

But there’s just something about the current crop of champions that feels like a breath of fresh air has come into cycling, amongst other sports, in recent years.

On the eve of Ash Barty’s historic grand-slam win at Wimbledon last week, her mindset coach Ben Crowe recorded a fabulous podcast on ABC’s radio program ‘Conversations’, where he talked about her career, setbacks, successes and her as a person. If you haven’t yet listened to it I won’t spoil it for you because it is absolutely terrific, but one of the moments in the podcast that stood out for me was when he isolated arguably the most significant turning point in her career to a specific moment in time, and how she used ‘humour’ to change her mindset in that moment, take control of the situation and set her on the path to becoming an Australian sporting legend. What this line demonstrates, and perhaps why Barty has so quickly become such a revered figure in Australian sport, is that her success has been less about hitting a ball with a racquet and more about finding strength in her imperfections and embracing life’s challenges with positivity. In an instant she went from being an immortal sporting figure to someone we could all relate to in our day to day lives.

As Alice and I sat in our car listening to this amazing story last weekend, the hairs on the back of our neck rising, I couldn’t help but compare this element of superior mindset displayed by Barty to the superstars of the pro peloton who have been entertaining us night after night, and keeping us from getting to bed at a respectable hour.

First of all, their performances are beyond amazing. Thinking back to Matheau Van de Poel’s explosive attack in the finale of Stade Bianche in March, I’m beginning to lose count of the races that have absolutely blown me away in the 2021 season so far. But more importantly, it is the attitude that they bring to their craft. The passion, the love and the fun that they appear to be having whilst doing their job. When Tadej Pogacar stormed off the front of the peloton in stage 8 of this year’s race in what would ultimately be his tour-winning move, you could actually see a wry smile on his face. Despite the fact that he had 15km of physical torture ahead of him, you could see he was genuinely loving what he was doing at that exact moment. Even better, as he sailed past the remnants of the early break-away at such a speed that made them look like they were standing still, the response from those riders, clearly visible to viewers on tv, was one of pure admiration and respect. They all knew what a courageous move it was to attack this early in the stage, and this early in the tour. Despite being on different teams they wanted to show their respect to the defending champion.

I remember Phil Liggitt and Paul Sherwen used to always refer to the riders as “these machines” as if they were some sort of Terminator-like characters that, if you peeled back their skin you’d see metal and wires instead of flesh and bone. As much as I always enjoyed Phil and Paul’s light-hearted ramblings in the commentary box, I would never use those words myself because they don’t capture what I believe to be true about these sporting heroes. They’re not machines powered by an engine. They’re living, breathing people just like any of us, who have made a career not by being perfect but by being courageous and committed. Everyone remembers all the races that Sagan has won, though think about how many races he hasn’t won, but gone down ‘swinging’. His willingness to back himself in any situation and, when it doesn’t work out, be humble in defeat is what has always stood out to me. I have no doubt his attitude has spread across the entire peloton and it’s great to see so many riders from other teams congratulating each other when they win. After Mark ‘Lazarus’ Cavendish sprinted to victory to win his first tour stage in 5 years, it was as if the entire peloton was lining up to congratulate him after the finish. I was almost ready to book a flight to France myself and deal with a 2-week quarantine just so I could get one of those ‘Cav’ hugs.

After 22 years, the thing that makes me so passionate about this race is that it celebrates the thing that I love most about cycling: it’s fun. The riding is fun, the racing is fun, the coffee, the climbing, the bikes are fun, the banter, the kit, the KOM’s, the kudos, the sprints and the Strava. There is so much that is fun about cycling and, every night as we sit there watching often not much but just beautiful scenes of the French countryside, I’m reminded of everything that I find fun about this sport and am inspired more than ever to simply ride my bike.